A recent article, published by Medical News Today, indicates that fMRI technology has shown how the human brain processes text while reading.

A new brain-imaging study is shedding light on what it means to “get lost” in a good book – suggesting that readers create vivid mental simulations of the sounds, sights, tastes and movements described in a textual narrative while simultaneously activating brain regions used to process similar experiences in real life.

Although this research was not a Dyslexia study, it is particularly important for dyslexics, as pictorial meaning of words is critical to their ability to comprehend what they’re reading.  In fact, one of the “Three Steps to Easier Reading Exercises” outlined in The Gift of Dyslexia ©1997 by Ronald D. Davis, Picture-at-Punctuation includes stopping at [major] punctuation marks and making a picture of what has just been read.  Progressing through the next sentence will build (accurately) upon the picture from the previous sentence.

For dyslexics, this reading exercise (in conjunction with the other Davis® exercises and tools) is incredibly helpful, as it either teaches dyslexics to create this visualization while reading  OR it eliminates much of the “embellishing” that happens while reading for the dyslexic, whose heightened visualization abilities are a natural talent.

It is very common to see dyslexics adding words to text, omitting words from text (commonly words that do not have pictorial meaning), and in some cases, have much more detail in their pictures than what the author has provided.  This can skew intended meaning.

For example, the dyslexic may process the word elephant – not just as a generic elephant – but rather, will visualize the elephant…the nearby herd of elephants…the jungle…the bird pecking on the elephant’s back…the dust and dirt as his big feet hit the ground…the sound of him chewing on the grass, and so on.  This may not be the picture that was intended by that word elephant.

Then there is the part of language that makes processing words very difficult  for a dyslexic – words like the, if, of, and so (commonly called “sight words”).  Verbal thinkers (non-dyslexics) can process these words easily, as they are part of the verbal thought process.   A dyslexic, however, will subconsciously try to obtain a picture for those words, just as they would with elephant. This causes confusion and reading becomes tedious, frustrating, and fatiguing.  Ultimately, confusion will build and perception of the words on the page will become distorted. 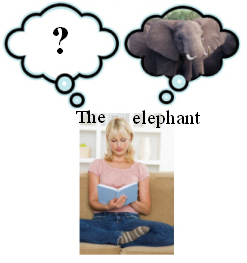 The dyslexia dilemma with reading

“Psychologists and neuroscientists are increasingly coming to the conclusion that when we read a story and really understand it, we create a mental simulation of the events described by the story,” says Jeffrey M. Zacks, study co-author and director of the Dynamic Cognition Laboratory at Washington University in St. Louis.     [emphasis added]

I found the following statement fascinating and would love to see the studies that this speaks to:

I wonder what would have happened if they had isolated the “sight words” in this study, and how that might have affected the brain activity – !  What part of the brain would be activated for a word with no visual image?  How would this differ with a verbal thinker vs. a picture thinker?

Nicole Speer, lead author of this study, says findings demonstrate that reading is by no means a passive exercise. Rather, readers mentally simulate each new situation encountered in a narrative. Details about actions and sensation are captured from the text and integrated with personal knowledge from past experiences. These data are then run through mental simulations using brain regions that closely mirror those involved when people perform, imagine, or observe similar real-world activities.

There is so much still to learn, but I am encouraged to see that research is beginning to study areas that include thought and perception as part of the equation!

For more information on the Davis theory of Dyslexia, the thinking style, or New England Dyslexia Solutions, visit http://www.ne-dyslexia.com.

This entry was posted on Sunday, February 1st, 2009 at 9:36 pm and is filed under Davis Dyslexia Correction, disorientation, Dyslexia, dyslexia research, dyslexic, New England Dyslexia Solutions, Ronald D. Davis, studies, visual perception. You can follow any responses to this entry through the RSS 2.0 feed. You can leave a response, or trackback from your own site.